What Happens When a Pilot Drives Under the Influence? 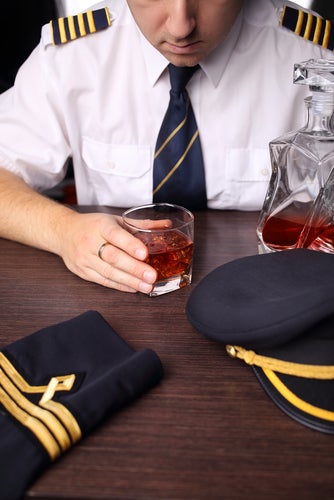 Christmas is fast approaching, which means people are traveling near and far to visit friends and family. At this time of year, we know that the roads are risky with potential drunk drivers, but what about the air? Pilots can be convicted of both driving and flying under the influence, but the consequences are very different.

An Indiana pilot, Robert Paul Harris, was recently arrested on suspicion of driving under the influence while on his way to the airport. It is unclear if Harris was reporting to work to fly a commercial plane that evening.

When Harris was stopped, police noted that he had bloodshot eyes, slurred speech, and difficulty using his hands. According to court documents, police stopped the field sobriety test because Harris almost fell while he was trying to walk. A breath test revealed that Harris had a blood alcohol content of .29, more than three times the legal limit. A judge ordered the immediate suspension of Harris's license. He pled not guilty to the DUI charges and his case has been set for trial in January.

Consequences of a DUI Conviction for Pilots

A drunk driving arrest does not mean a pilot will lose his or her license. Pilots, unlike commercial drivers, do not face automatic license suspension if they are convicted of a DUI while driving a private vehicle. Instead, pilots must report an alcohol-related conviction, suspension, or revocation to the Federal Aviation Administration within 60 days, including a failed breath test. One reason for this policy is federal aviation regulations do not require a pilot to have a driver's license at all.

Federal regulations state that a pilot must follow the 8-hour “bottle to throttle” rule, meaning pilots must go 8 hours between having a drink and flying a plane. Some airlines require a 12 hour period between a flight and the pilot's last drink. The regulations also state that a blood alcohol content of .04 is over the legal limit.

While a pilot may not face immediate consequences for a DUI arrest or conviction regarding their pilot's license, any failure to report DUI activity can result in the suspension or revocation of a pilot certificate. Also, pilots can face a $250,000 fine or up to 5 years in prison if they are not truthful about a DUI.