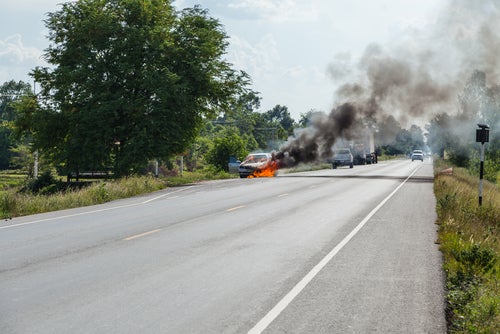 If you are caught driving under the influence, you could face more than just a standard DUI charge and the consequences that come with a DUI conviction. Additional charges on top of a DUI conviction are common, especially since drivers arrested for driving under the influence often cause a lot of damage. Many DUI offenders leave a trail of damage in their wake, including wrecked vehicles, downed utility poles or traffic lights, and broken windows in storefronts. Sometimes DUI damage is a lot more significant than the average wrecked vehicle.

A California woman driving under the influence, 44-year old Rene Ilene Hogan, started a fire that set ablaze 450 plus acres of grass and forest in Calaveras County. Hogan was so high that she did not realize that she had a flat tire on her 2002 Kia Rio. She continued driving even once the tire wore down to the rim, which created hot sparks. Some of the sparks landed in the dry grass lining the highway, igniting several fires, including a fire in Hogan's vehicle.

Motorists tried to signal to Hogan to stop, but she did not respond. A motorist ultimately had to stop in front of Hogan, forcing her to stop. The motorist and nearby residents were able to pull Hogan from her car before she suffered any burns. By the time Hogan was stopped, the tire rim had been ground down three inches. Police charged Hogan with driving under the influence of narcotic analgesic and cannabis, as well as driving with a suspended license.

It took firefighters three days to contain the fire. The fire threatened dozens of homes and the residents of Willow Valley were forced to evacuate. Fortunately, the fire only destroyed one residence and a garage. In addition to her DUI charge, Hogan is facing charges from California Fire. These charges include unlawfully causing a fire that causes an inhabited structure to burn; seven counts of unlawfully causing a fire of structure or forestland; and one count of committing a violation during a declared state of emergency.

DUI and Property Damage in Washington

Under Washington law, anyone who is convicted of DUI and is responsible for injury or damage to another or another's property may receive enhanced penalties. This means that the property damage charges can be used to enhance the mandatory minimum penalties on the DUI conviction. If you damage property while driving under the influence and fail to notify the owner of the property, that is defined as a hit and run and is considered a misdemeanor crime. A hit and run that kills or injures another person is a felony crime.