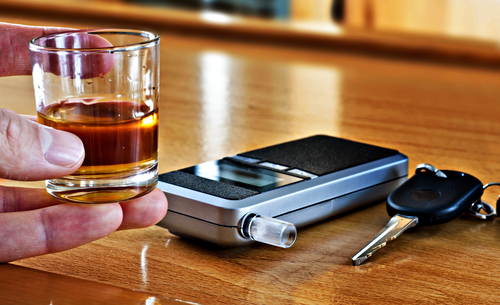 As the new year approaches, people are preparing to engage in festivities for New Year's Eve - a night notorious for wild parties and drinking. In a response to the upcoming holiday, law enforcement officials nationwide are gearing up to patrol the streets for impaired drivers. While federal campaigns have discouraged drinking and driving within the same night, people may decide to get behind the wheel after consuming alcoholic beverages because they think they haven't drunk enough to exceed the legal blood alcohol content level of .08%. Since everyone absorbs and metabolizes alcohol at different rates, some people are bound to recover more quickly than others. Without a breathalyzer on hand, it's difficult for individuals to determine if their blood alcohol level is over the limit. However, thanks to a new innovation in technology, people may have a new, accessible way to avoid DUI charges at their fingertips.

A group of Israeli researchers developed a virtual breathalyzer compatible with smartphones and smartwatches that monitors a potentially intoxicated motorist's movements and alerts them before getting into their car. By adopting motion technology previously instilled in most cellular phones and other technology, they've programmed the virtual device to identify signs the user may be too intoxicated to drive.

“Alcohol distinctly affects movement, gait, and balance in ways that can be detected by the built-in motion sensors on devices people carry around with them all the time,” said researcher Ben Nassi, a graduate student at Ben Gurion University of Negev.

While actual breathalyzers are available for purchase (usually costing around $100 to $150 dollars), the researchers believed that installing this technology in smartphones will reach more people, especially the demographic of people most likely to be involved in alcohol-related accidents - drivers in their 20s and early 30s.

The developers deemed the virtual breathalyzer as 93% accurate, with the ability to effectively gauge intoxication with only 16 seconds of data collected while a person walks. They conducted an experiment that consisted of 30 participants, both male and female, who were randomly selected at three bars in Tel Aviv. They were all hooked up with smart devices to detect their movement. The researchers used the illegal blood alcohol intoxication in Israel, which is 240 micrograms of alcohol per breath, as a measuring point for the experiment. Once the blood alcohol level of the user is calculated, data was sent via Bluetooth to an application created and instilled on the smartphone, giving the user their results. The findings revealed that only one person was mistakenly identified as sober when he was, in fact intoxicated.

If integrated as software in smartphones or turned into a third party app, avoiding a DUI charge could be much easier, however, concerns pertaining to privacy and protection from hackers have arisen. Nassi says that encrypting the data will take care of that issue.

A DUI in the state of Washington can result in serious repercussions. Your hard earned finances, driving privileges, freedom and future are at stake when you have a DUI charge on your record. Anyone facing these charges has a right to a quality legal defense. If you have been apprehended in Washington, call Coleen St. Clair at St. Clair Law Offices (206) 578-2200 or contact her online.