Driving on a Suspended License 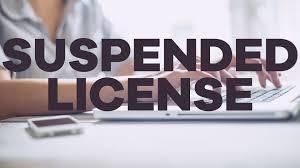 If you are charged and convicted of driving under the influence, there are many secondary consequences that you might face in addition to the traditional penalties under the law, like increased car insurance costs, the costs of an interlock device, or driving with a suspended license. If you make the decision to drive with a suspended license, you could face a criminal charge and jail time.

Driving on a suspended license (DWLS) is the most charged criminal traffic offense in the state of Washington. There are a number of ways that you can have your license suspended or revoked. The most common reasons for suspension are:

Washington law states that it is unlawful for any person to drive a motor vehicle when his or her privilege to drive is suspended or revoked in Washington or any other state. The crime of DWLS is broken up into three categories, each a different level of severity.

DWLS third degree is the least serious of the three and is a simple misdemeanor. It is punishable by a maximum of 90 days in jail and up to a $1000 fine, though it rarely results in jail time. Your license can be suspended in the third degree due to an unpaid traffic ticket, unpaid child support, or not getting your license reinstated after a period of suspension.

DWLS second degree is much more serious than DWLS third degree. You will automatically receive a DWLS second degree if your license was suspended as a result of a DUI, reckless driving, hit and run, or felony driving crimes. This charge is a gross misdemeanor and is punishable by up to a year in jail and a $5,000 fine. Most people convicted of this charge do no receive jail time, but it is a possibility, especially if you have a poor driving record. A conviction for DWLS second degree also carries an additional year license suspension beyond the suspension you are already serving.

Anyone facing charges of driving under the influence has the right to a quality legal defense. If you have been arrested in Washington State, suspected of DUI, call Coleen St. Clair at St. Clair Law Offices (206) 578-2200 or contact her online.