A Deadly DUI with a Golf Cart 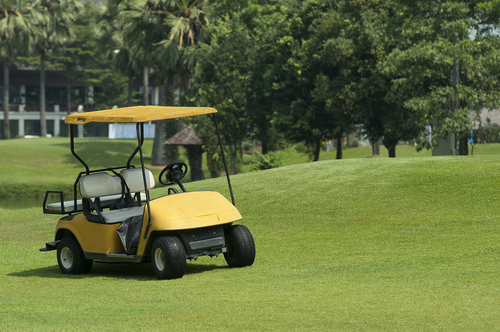 DUI crashes are a fairly common occurrence in the United States. When most people think of a deadly DUI crash they picture a car or a truck, but deadly DUIs can result from incidents involving much smaller vehicles.

Lori Doyle, from Gallatin, Tennessee, was charged by police with vehicular assault and a DUI first offense after her husband, Timothy Doyle, fell from the golf cart she was driving and hit his head. Mrs. Doyle turned the golf cart too fast, causing her husband to be thrown from the golf cart. Emergency responders took Mr. Doyle to the hospital where he died two days later from his injuries.

When police arrived on the scene, officers reported that there were three open beer cans in the golf cart and one on the roof. Mrs. Doyle was questioned and the officer could smell alcohol on her breath and noticed her eyes were bloodshot. She said that everyone drank around 10 beers each. The case is still under investigation and Mrs. Doyle could face additional charges.

Golf Cart Injuries on the Rise

Courts take golf cart DUIs very seriously because golf cart accidents are on the rise in the United States. There are approximately 15,000 injuries that occur from golf cart accidents each year, and 69 percent of those victims suffered head injuries. The presence of alcohol is a major contributing factor to golf cart accidents. Golf is a very popular activity in the state of Washington and is especially popular during the spring and summer months. The likelihood of being involved in a golf cart accident is relatively low, but it does pose the potential for a serious injury.

According to Washington law (RCW 46.04.1945), a “golf cart” is defined as “a gas-powered or electric-powered four-wheeled vehicle originally designed and manufactured for operation on a golf course.” Every person that operates a golf cart in Washington is granted the same rights and is subject to the same laws as the driver of a motor vehicle. Golf cart accidents must be reported like motor vehicle accidents and a person who has a revoked driver's license may not legally operate a golf cart. This means, unlike drinking and bicycling, a person in Washington can get a DUI for drinking and driving a golf cart.